Emer: Toad will remember that.

Games Played: The Sims 4, Portal Stories: Mel, Overwatch, The Wolf Among Us, World of Warcraft 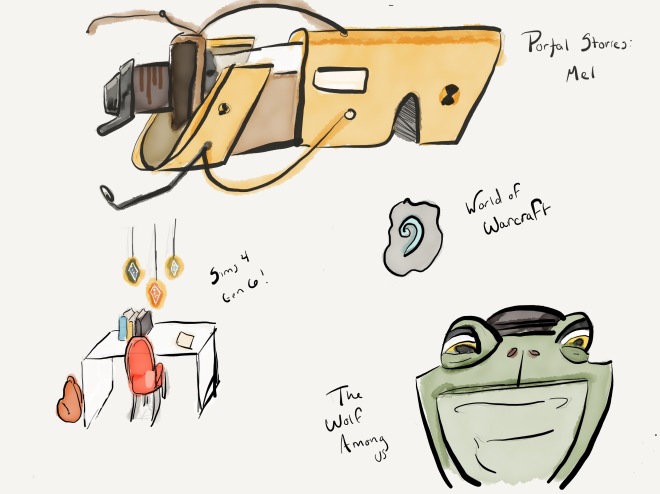 No game plays to my ego quite as much as Portal. Sure, it beats me down by making me feel like the dullest person in the world but also, also, it makes me feel like a goddamn bonafide genius when I figure something out. It’s like a drug. So, I decided to put some time into Portal Stories: Mel, which is a free fan-made expansion to Portal 2. It’s pretty complex, with voice acting and a story line, and it’s very, very slick. Ch00 was nice enough to join me for a night when I’d been staring at a puzzle for about four hours already. I knew exactly what I was supposed to do, could see the means to do it, and still couldn’t figure it out.

Aside: As always, Ch00 and I work together very well on games, especially on Portal. I’ve said it before and I’ll repeat it now: our strengths in games are different, and in a puzzle game that’s ideal. There’s a lot of nonverbal communication, or perhaps barely verbal: “No, look, just put your blue portal THERE, no, yes, there, and then…” and it works.

Portal Stories: Mel tells the story of Mel, a astronaut/war hero/or other notable who was brought to Aperture to be a test subject in the Cave Johnson days. Mel goes into stasis, and wakes up to find Aperture falling apart around her after a disaster; it echoes Portal 2 but is a bit of an alternate universe. It’s possible I’ll find it looping back into the main timeline at the end, but Mel would have had to be in stasis for a long time for it to make a whole lot of sense (to have slept through the time when Cave was using vagrants and other ‘undesirables’ for testing, and to wake up before the events of the original Portal). Mel is being helped along by a helpful personality sphere, Virgil, while being threatened by a mysterious voice, Aegis. I’m going to put it on the record here that Virgil’s going to fuck me over.

When I need a break from thinking, I’m playing WoW again; the new expansion comes out at the end of August and the pre-expansion patch has hit. I’m pretty satisfied with everything so far, but am 100% prepared to find myself sick of the game within the next three months and once again bemoaning the time I’ve wasted in Azeroth. Ah, well.

Overwatch is a good palette cleanser too, but only when people I know are playing. I tried the new hero, Ana, and am TERRIBLE at her. Snipers aren’t my thing! Really, if I stick to Lucio/Mercy/Junkrat I do great, but ask me to do something harder and I’m screwed.

The Sims 4 has reached generation 6, and my heir has just grown up and picked out a spouse to aim for, so we’re getting close to the end of this one. We’ve just bought a new house because I was sick of the routing options breaking my old one, and also my sims constantly trying to mourn long dead ancestors, so it was time. Now I get to waste more time redesigning, my favorite thing!

Lunchtimes and downtimes I’ve been playing The Wolf Among Us on my iPad. It’s a solid TellTale game, but the story just isn’t grabbing me the way that other TT games have. Still, Chapter 1 is finished and I am interested enough to see how the rest goes to keep playing.

I’ve missed posting. Time to get back to it!