Emer: The Faces of Link.

Games Played: The Legend of Zelda: the Wind Waker; FFRK 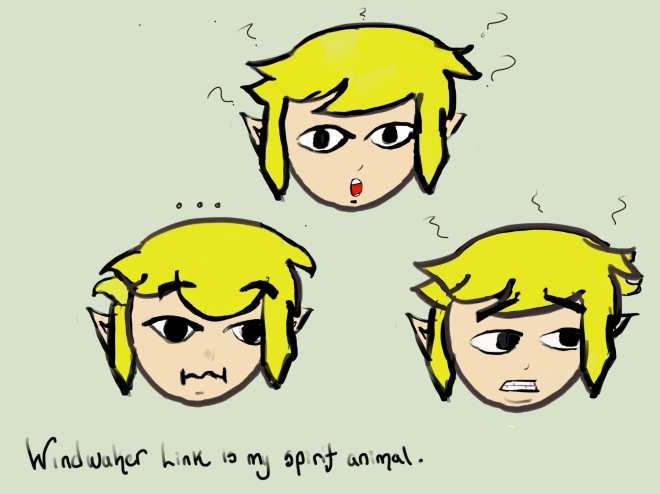 Once I finish ME3,

I’m going to play the hell out of Wind Waker for the goddamn CHEER of it.

I mean, comparatively: this is still a game wherein Ganon kidnaps young girls, leaving their bereft families begging random passerby for help. But, on the other hand, it’s not a game where I have to make decisions that will kill a) a person, b) many persons, c) an entire colony, d) an entire race or e) an entire galaxy. It doesn’t take much to look cheerful in comparison.

In the vast universe that is Zelda canon (ahem, Majora’s Mask), Wind Waker IS cheerful. It’s charmingly animated and I will fight anyone who disagrees. Tell me, after comparing the Twilight Princess HD remake (game originally released in 2005) with the Wind Waker HD remake (game originally released in 2003), which aged better? This is not a subjective question. There is one right answer. I like Twilight Princess, a lot. I like almost all Zelda games (ahem, Spirit Tracks). But Wind Waker is amazing, and underrated by many, and is my absolute favorite.

Of course, this is also the game that I remember losing an entire college break to, huddled in my room with the GameCube and my ALSO beloved-in-memory striped sheets and my ALSO adored-in-memory mix cd that my sister and I made (“happy music”, starting with Sunday Morning by Maroon 5. Pretty sure it featured most of the Love Actually soundtrack, actually). Sarah and I would play Super Mario Sunshine, and after she went to bed I’d stay up all hours playing Wind Waker. It’s the game that personifies total joy to me — the last time I can remember playing games with no guilt whatsoever, in a cold winter when I had nothing else I had to do. It’s my golden standard of relaxation through gaming. So, I may not be capable of being FAIR about this game.

Whatever: it’s objectively great. I mean, look. In the first ten minutes of the game Link makes the following faces (poorly illustrated above): Buh, ugh and UHHHHH?? I identify with this befuddled, determined and slightly dim Link. Bless him, he’s in no way prepared for the rigors of saving the world, and yet in pursuit of his goals cheerfully ignores unkind people, mad pirates, insults, drops from high spaces, monsters, obnoxiously lazy townsfolk and kids with snotty noses.

Luckily, thus far it’s holding up quite well to my memories. It’s funny. Not just Link’s amazing faces, but in the details too: the face of a fairy that you capture in a bottle is pricelessly dismayed. There’s Trott the dancer, happily shaking his hips on a cliff by himself. Also, there’s the perfect amount of menace: Tingle belongs in a creepypasta, I don’t care what you say. There’s his hidden cache in the jail, where the pictograph lives surrounded by skulls. He’s completely disconnected from reality, but with it enough to be a slavedriver for his “friends” on the island, pushing the windmill. He’s an evil mastermind, is what I’m saying. Anyway, attention to detail: check.

I’ve just completed the entry dungeons required to collect the three pearls, which were easy. Maybe the whole game is, I can’t remember, but I do remember that the charm of Windwaker for me was the sheer volume of things to do. Salvage crates, collect things to make people happy, sail the seas, learn songs, solve problems. It’s as close to open world as I can imagine a Zelda game being. I’m debating going for a true, 100% play through: I won’t have the patience for that with almost any other game I play this year, but this is one that tempts me. I don’t want to leave this world.

I’m still slowly slogging through FF:RK, about which there’s nothing new to say except, perhaps, that I just gave Yuna a gun and I am remembering how much I adored FF:X and, whatever I’ll admit it, FF:X-2. Yuna is a precious muffin and I’d like to smoosh her cheeks together. I’ve paused Harvest Moon because while it was a welcome respite from Mass Effect, my charm quotient is currently being filled admirably. It’ll have to hold its place till it’s time to pick up Alien: Isolation again.