Alright, let’s break it DOWN.  Here are my ratings from the last time with updated final reviews:

The game had good graphics, but i noticed that if Hard Reset wasn’t the only thing application running on my PC, there was some pretty significant screen tearing.  After a long gaming session it was making my eyes buggy.  The atmosphere and the surroundings were really well done on each level. 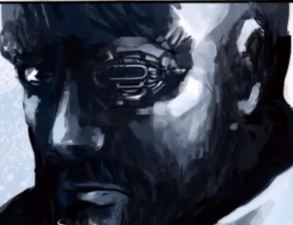 Sometimes i had the feeling that I was never going to see a new area, the levels dragged on for too long and the surroundings got very dull very fast.  I remember thinking that i was going to see metal fences forever in the junk yard level(s).  I don’t remember why that stuck out but being able to see a through a fence and all the goodies on the other side that you couldn’t get (yet)…it drove me INSANE.

I would have REALLY loved to see 1 animated sequence instead of less than stellar drawn art.  Seriously, sometimes my bad ass character looked liked he was always being electrocuted…it was kind of disappointing.

The story seemed to pick up the further i got into the game.  From what I gathered, i was a cop that found out that the people i worked for, were shady (isn’t that always the case?).  I find out from the evil guy that i was sent to stop.  He injects me with something that paralyzes me while i watch him shoot himself (ooooookay?)…I then inject myself with something he told me to (Who the F%^# does that?).  Then, the rest of the game I hear this mad scientist talking to me in my head…like some digitized friend that you never asked for.

Strange…but not the Worst… 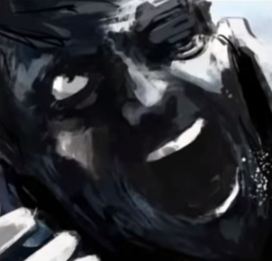 The pace of the story was god awful.

It was so bad that I could summarize each level with 3 easy steps (sounds like a bad kids cartoon).

Although the story and the pace of the game was terrible.  I liked the interactions i had with the game.  There were clever ways of clearing a room or what i had to kill before i could activate a switch to leave the room.  The boss fights had very neat interactions that I had to figure out before i could do damage.  A good interaction in each level that kept me playing the game.

The game got challenging in certain areas.  I think the game really nailed the difficulty side of the game.  I liked how i didn’t feel invincible and how it sometimes felt that i was a squishy grape that needed to move out of the way of missiles.  Some games make you feel like a god that can never die, this game found just the right balance.

The main voice of the bad ass cop isn’t bad.  The rest of the voices seemed really forced.  Sometimes i couldn’t handle how rigid and forced some of the lines sounded.

The next console game that is on my radar to complete is: Assassin’s Creed: Syndicate

I’ve been going really slow on this game because i heard that the next Assassin’s Creed game isn’t going to be released for another year.  I think Ubisoft is getting tired of rushing these titles and getting bad press. for all of the bugs that accompany the game.

Looking at my PC game list, it looks like Mirror’s Edge is the next game on the docket.

I started this game a couple of months ago but never really got into it, I realized it had potential but i didn’t give it the right attention it deserved.  I might take the time to appreciate the game as well as bust out a controller for the game.  I think this game is supposed to be played with a controller instead of a keyboard and mouse.

Let’s get this jumping!