We had a blizzard this weekend, you see. On Thursday they told us we would get less than 2 inches of snow. On Friday, they said maybe 6. When all was said and done on Sunday we had about 17 inches of snow. I lost power, and I had a fire, and I played the hell out of iOS games.

So, Oceanhorn: I will say this for it. The last boss (you’ll never guess what his name was. Oh, did you guess Oceanhorn? You smarty, you) was a challenge. It took me probably six tries to beat him, and it wasn’t because of shitty controls, it was because it was actually a tough fight. It warmed me immeasurably for the rest of the game, although not enough that I wanted to go back and get 100% completion (I finished with about 60%). Overall: Not the Worst (4 out of 10)

Lego Harry Potter was like every lego game — cute, fun, not particularly difficult. I was so bored by the end though, SO BORED. As I mentioned before, I downloaded it when I was mid-reread of the books, and was feeling sore about Lupin dying. Yeah, ok, Dumbledore dies and so does Snape and so does Fred Weasley and those were all sad moments but LUPIN? Like his life wasn’t hard enough ALREADY, J.K. Rowling? He’s a werewolf, poor, miserable, finally finds love, and you KILL HIM? You are one of history’s greatest monsters. Anyway. It was a good game, probably fantastic if you’re Harry Potter obsessed, polished and fun. Overall: Actually kind of better than the worst (7 out of 10) 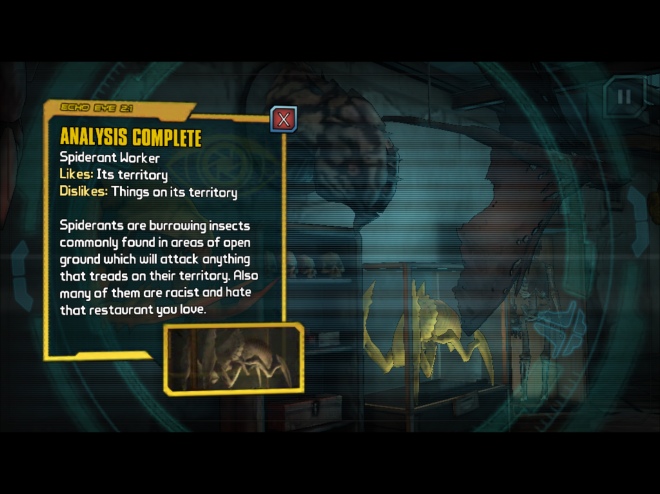 Tales from the Borderlands nabbed a lot of GOTY nods this year, so I was excited to play. I like the Borderlands games. They are forgiving shooters with a sense of humor and a really unique aesthetic and a killer soundtrack and a really chunky feel, so what’s not to like? I guess if you’re good at shooters the lack of fine tune control is probably a bit boring, and maybe the whole cartoon desert atmosphere doesn’t do it for you, and sometimes the humor falls flat. But overall, they’ve always been a joy for me to play.
Tales is by Telltale Games, who are are Very Good at what they do, which is to tell stories as games. This isn’t a shooter, or an action game in any real sense of the word. It’s more a choose your own adventure and occasionally take part in a fight using QTEs kind of game. Those of us who like stories in games will love this one (much like Telltale’s The Wolf Among Us or The Walking Dead).

It’s not a traditional game. The challenge isn’t in how quickly you hit buttons (well, mostly it’s not), it’s in making decisions you are ok with. Do I keep silent to avoid offending an ally? Should I be a smart ass? Of course I’m a marshmallow so I’m constantly trying to make the nice decision, but Telltale employees fine writers and it turns out sometimes the nice decision kicks you in the teeth; also, just because I am trying to be an upstanding team member, that doesn’t mean everyone else is going to be too.

(Not creepy at all). (Handsome Jack doesn’t find me creepy) (at all)

(Seriously, Rowling, why LUPIN).
Sorry. Anyway, I’m on chapter four of five and I just want it to last forever. This week is finishing that off, and starting…something. On the computer. Some.thing.